Also known as the tricolor shark or silver shark, the young Bala shark is a staple item in most aquarium stores. However, this fish is a poor choice for most aquaria. The Bala shark (the name is an abbreviation of the scientific name) is active, grows to fourteen inches, and prefers living in midwater shoals. So the typical community aquarium is too small for keeping the Bala shark long-term.

The Bala shark is very peaceful. Even though this fish grows large, it will not bother other fish—except those small enough to fit in its mouth. Ideally, you should keep groups of six or more, but no less than three.

You’ll have no problem feeding this fish. The Bala shark accepts all foods, including flakes. The fish is primarily carnivorous but may bother soft plants. Live, frozen, and freeze-dried foods are favorites. A proper diet will intensify the colors in the fins, as will keeping this fish against a dark background. White gravel or background will cause colors to fade.

Though fish farms breed the bala shark in large numbers, do not expect to spawn this fish in a home aquarium. Commercial breeders use hormone injections to condition the fish and to get them to spawn. 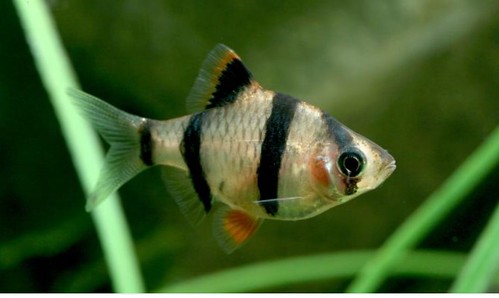 Barbs are freshwater tropical fish within the genera Barbus and Puntius. They are very popular aquarium inhabitants, and the group includes well-known species such as the tiger barb and cherry barb. They do best in schools and keeping a few will decrease the chances that they will pick on other fish.

The betta, also known as the Siamese fighting fish, has become a popular fish among hobbyists primarily because of the male’s beautiful colors and lavish finnage. More than one female can be kept in a peaceful community setting, as long as there are no fin-nipping fishes, such as some of the characins and barbs.

The male betta, however, should either be housed in a 1-gallon or more container as a single specimen or as the only male of its species in a peaceful community tank setting. Otherwise, the male will attack and tear other the fins of other male bettas, sometimes resulting in the death of one of the combatants.

A female and a male should only be kept together if baby bettas are desired. The male will harass the female before, during and after spawning, and, unless sufficient hiding places are provided, may even kill her.

The betta can be housed in an aquarium that is moderately decorated with plants, rockwork, and driftwood. Avoid any decorations or gravel with sharp edges. Plants should be kept to the sides and back of the tank, as well as a few of the floating varieties at the surface. This fish is an excellent jumper, so a tight-fitting cover is a must.

If you are housing a single male in a gallon container, the surface must be kept free of dirt and debris. Frequent water changes are a must in this situation.

The betta will accept a wide variety of foods, including small live foods, such as bloodworms, blackworms, chopped earthworms, Tubifex worms, glass worms, and brine shrimp. It will also accept flake and freeze-dried foods, including the specialized betta diets now available at pet stores.

The male gathers the falling eggs in his mouth, coats them with saliva and carefully “spits” them into the bubble-nest. The female will also participate in placing the eggs in the nest, but soon the male will chase her away and care for the brood himself. At this time it is important to remove the female or the male will do her serious harm. Once the fry is free swimming, in about five days, the male should also be removed. The black tetra has been a popular staple of the aquarium hobby for many years. Commercial breeders have developed different color varieties (unfortunately, including the “blueberry” and other dyed fish), and there are long-finned specimens. The black tetra has been bred in such quantities both in Florida and the Far East that fish imported from the wild are virtually never seen.

Along with the zebra danio and the white cloud mountain fish, the black tetra is probably one of the easiest egg-laying fish to get to breed. It is not at all particular about water conditions, and basically a male and an egg-filled female in a tank with plants will lead to eggs and babies. The young grow fairly quickly and therefore are easy to raise.

An ideal community tank fish, the black tetra does best in schools of at least five or six fish, and it prefers a planted tank with plenty of places for it to hide and hang out in. It will eat absolutely anything in the way of the standard aquarium fare, and can even be conditioned for breeding on dry food. One could not ask for a more pleasing fish to keep. The blackline penguinfish is also called Boehlke’s penguinfish, false penguin tetra and hockey sticks. This species needs at least a 20-gallon aquarium for a small group of six or more fish. This fish is hardy and sticks to the upper waters of the community aquarium. Instead of swimming horizontally like most aquarium fish, the blackline penguinfish swims with its head slightly raised. The body is mostly an olive color, but its characteristic thick black stripe begins just behind its gill cover and extends all the way to the bottom lobe of its forked caudal fin. If the light reflects well, a thin greenish-gold line can be seen just below the black stripe. The fins are colorless. The blackline penguinfish is sometimes confused with Thayeria obliqua, which looks similar, but the black line on Thayeria obliqua begins after the dorsal fin (on Thayeria boehlkei, the line begins just behind the gill cover).

The blackline penguinfish should be kept in a well-planted aquarium with dark substrate. Floating plants can also provide shady hiding places for this species.

Breeding: Females have a much rounder belly, especially when filled with roe. The breeding aquarium should be dimly lit and include a slowly bubbling sponge filter, as well as clumps of fine-leaved plants or spawning mops. The water needs to be soft and slightly acidic, and it should be several degrees warmer than the breeders’ display aquarium. A group of these fish can spawn at the same time in the same breeding aquarium. Place the breeders into the aquarium at night, and they should spawn in the morning, with each pair laying and fertilizing about 1,000 eggs. After they have completed the breeding attempt, remove the parents to prevent them from eating the eggs. A water change may also need to be made due to the large amount of sperm that the males release into the water. Eggs hatch in about 24 hours. The fry are free-swimming in about four or five days. Feed blackline penguinfish fry newly hatched brine shrimp, infusoria, Daphnia, finely crushed flake food and other small foods. The bleeding heart tetra is a hardy, peaceful, schooling species that should be kept in groups of six or more. It does extremely well when kept with other peaceful fish, such as Megalamphodus, Corydoras and Nannostomus species.

The bleeding heart tetra prefers a somewhat dark environment. It is best housed in a tank that contains several bunches of large plants (either live or plastic) in the back and on the sides of the tank, with smaller plants in the front, leaving plenty of open space for swimming. A layer of floating plants to diffuse the light is also suggested. Pay strict attention to water quality.

Most tetras are carnivores that are specialized for eating small aquatic insects and the larvae of terrestrial insects. In the aquarium the tetra will do quite well on a commercial flake, frozen or freeze-dried foods. Be sure to vary its diet between dry foods and small live foods, such as bloodworms, glass worms, brine shrimp and Tubifex worms. The blind cave tetra is a schooling species that is a little too aggressive for the normal tetra community. It is best kept in a group of three to six individuals in a tank with other robust fish, such as small cichlids, livebearers, barbs and catfish.

Like most tetras, the blind cave tetra prefers a somewhat dark environment. It is best housed in a tank that contains several bunches of large plants (either live or plastic) in the back and on the sides of the tank, with smaller plants in the front, leaving plenty of open space for swimming. A layer of floating plants to diffuse the light is also suggested.

Most tetras are carnivores that are specialized for eating small aquatic insects and the larvae of terrestrial insects. In the aquarium the blind cave tetra will do quite well on commercial flake, frozen or freeze-dried foods. Be sure to vary its diet between dry foods and small live foods, such as bloodworms, glass worms, brine shrimp and Tubifex worms.

As with most tetras, the blind cave tetra is an extremely prolific breeder, and, although the adult female appears to have a fuller body, the best way to ensure a breeding pair is to purchase a group of six or more and let them pair up. The fry hatch quickly — within two to three days — and are free-swimming from the sixth day. The fish are able to see as fry, but as adults, they lose their eyes. The blue gourami is a robust fish that should be kept with other hardy, but mildly aggressive, community tank fishes. When kept with active, aggressive fishes it will often retreat to a corner and hide. House only one male per aquarium, as this species has a tendency to fight with one another.

It should be housed in larger tanks (i.e., 30 gallons or more) that are densely planted with live plants, such as Hygrophila and Limnophila on the sides and back of the tank, as well as floating plants like Riccia. Artificial plants are also acceptable.

Provide lots of hiding places for the female in the form of rocks and driftwood, and leave plenty of swimming area in the center to accommodate its lively antics. This fish is an accomplished jumper, so a tight-fitting cover is a must.

The blue gourami accepts a wide range of foods, including small live foods, such as bloodworms, Tubifexworms, earthworms, glass worms, and brine shrimp, as well as flake and freeze-dried foods. Supplement with vegetable matter in the form of Spirulina-based foods or parboiled vegetables, such as romaine lettuce, zucchini or peas.

This fish should be bred only in large aquariums (i.e., 30 gallons or larger) with plenty of hiding places, as the male may become overly aggressive toward the female during spawning. Remove the female to another tank once spawning is complete. During breeding, the male builds a large bubble-nest (sometimes reaching 9 inches across) among the floating plants at the surface of the water.