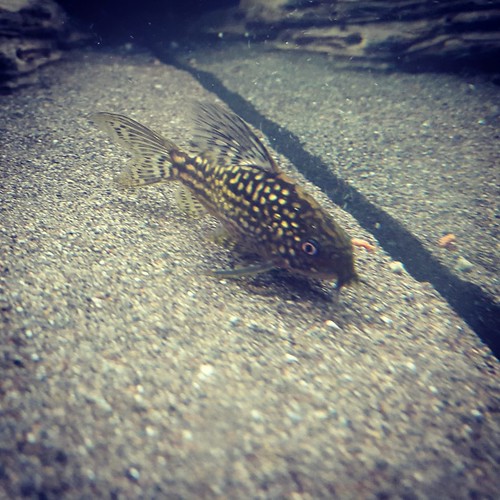 Catfish are very recognizable and popular aquarium inhabitants. They belong to the order Siluriformes and include a wide variety of freshwater and saltwater catfish families. Most aquarium species are benthic in nature and are instantly recognizable for the long barbels that are similar in appearance to cat whiskers. As with much other fish, the cherry barb is now almost exclusively raised commercially in the Far East and Florida. If you ever have a chance to procure wild stock, purchase them and you will see what their true colors are. That said, the cherry barb that is in the hobby now is a beautiful fish. The males, when mature and wanting to breed (which they always want to do), are an incredibly dark purplish-red almost verging on black.

Spawning cherry barbs is easy except that the parents tend to eat their eggs, so plants or artificial spawning mops must be very thick in the breeding tank. Condition the males and females separately and put them together in the evening before the day they are to spawn. Check for eggs, and if they are there remove the parents immediately.

This fish makes an excellent addition to a community tank, but it is imperative that it be quarantined before introducing it to the main tank. The cherry barb is very susceptible to velvet (Oodinium) and prophylactic treatment in a quarantine tank is recommended.

The cherry barb will accept all foods with equal greed and is never a problem to feed. Flakes are fine for its basic diet, but breeders should be conditioned on frozen or live foods. Dense thickets of plants make it feel secure and will bring out the best in terms of its colors and behavior.

Cichlids are mainly freshwater tropical fish from the family Cichlidae. They are found around the world, but members of this family that are most often encountered in the aquarium hobby come from either South America (including larger specimens, such as the discus, oscar and Jack Dempsey) or Africa (generally smaller, attractively colored fish from Lake Tanganyika and Lake Malawi). The clown barb is a very active, medium-size, elegant species that should be kept with similar-size species that also prefer warmer water. It should be kept in a large aquarium (50 gallons or more) that are densely planted on the sides and in the back with clumps of plants, such as Myriophyllum or other similar bushy type plants, either live or artificial. (Note: Although the clown barb is not a strict vegetarian, it will decimate any soft plants. If live plants are desired, use hornwort, Java fern or tape grasses, such as Vallisneria.) Provide plenty of hiding places in the form of rocks, driftwood or PVC piping.

Like most barbs, the clown barb is considered omnivorous and will eat just about anything that fits into its mouth. Feed it a varied diet that consists of vegetable-based flake, freeze-dried and frozen foods, supplemented with small live foods, such as bloodworms, glass worms, brine shrimp, Tubifex worms and Daphnia. If a small amount of vegetable matter is not provided (i.e., parboiled lettuce, zucchini), it may nibble on any live plants in the aquarium.

This species is easy to spawn as long as both sexes have been well-conditioned and the male is mature enough (males mature after a year and a half or more). Separate the sexes and feed heavily for four weeks prior to spawning. Males tend to be brighter in color than females, and somewhat slimmer. The parents will scatter their tiny eggs among the plants. Remove the parents to a separate aquarium after spawning because they are noted egg stealers, and it is easier to remove them than to pick out the many tiny eggs.

Therefore, if you want to keep the clown knife fish please be prepared for what you will have to do as it outgrows tank after tank. The basic body color of the clown knife fish is a very attractive slate gray, with a nice sheen to the entire dorsal side of the fish. Small fish have a few black circles with a white border, and as the fish matures the number and size of these circles increases.

The clown knife fish is by nature a nocturnal fish, and it will be most happy if the tank does not have bright light and if there is a nice cave, driftwood or other places for the fish to hide during the day. The tank should also be heavily planted, and have a portion of the tank shaded with floating plants.

They will do fine in groups, as long as the tank is large enough and there are enough hiding places for each clown knife fish. They get along fine with other large peaceful fish, but they can and will eat anything that they can fit into their very large mouth. There are no records of the Clown Knifefish breeding for hobbyists that I know of. The clown loach is an active schooling fish that is best kept in small groups (three to six fish). It will tolerate tankmates of other species, although docile species may become agitated by the constant activity of this fish. The clown loach may alarm its owner by lying on its side or back — while resting — appearing to be dead. This is a normal clown loach behavior. It also makes audible clicking sounds in the evening.

The clown loach has switchblade-like eye spines, but because it is not a territorial fish, these pose no threat to its tankmates. However, the clown loach may become entangled in nets, and may also cause injury to the aquarist’s hand if he or she is not careful. This species can live for as long as 20 years in the home aquarium.

The clown loach inhabits flowing streams and their overflow basins in nature. Because it prefers plenty of room to swim, it does best in a large, dimly lit tank that has numerous places to hide and hardy live plants, such as Vallisneria and Cryptocoryne to swim through. Artificial plants are also acceptable.

Provide a soft substrate because the clown loach likes to nose through the substrate to find tidbits of food to munch on. It also likes to perch high up on a piece of driftwood.

The clown loach will accept most commercially prepared flake, freeze-dried and frozen foods. Its diet should be supplemented with small live foods, such as Tubifex worms, bloodworms, and brine shrimp.

To date, there have been only rare reports of spawnings in the home aquarium. Details are lacking.

The clown loach is a “naked-skinned” fish. That is, it either lacks or has very tiny scales that are embedded in the body. This can present a problem because it provides the fish with almost no protection from toxic materials dissolved in the aquarium water. Avoid adding medications to the aquarium unless they are specifically recommended for “scaleless” fishes.